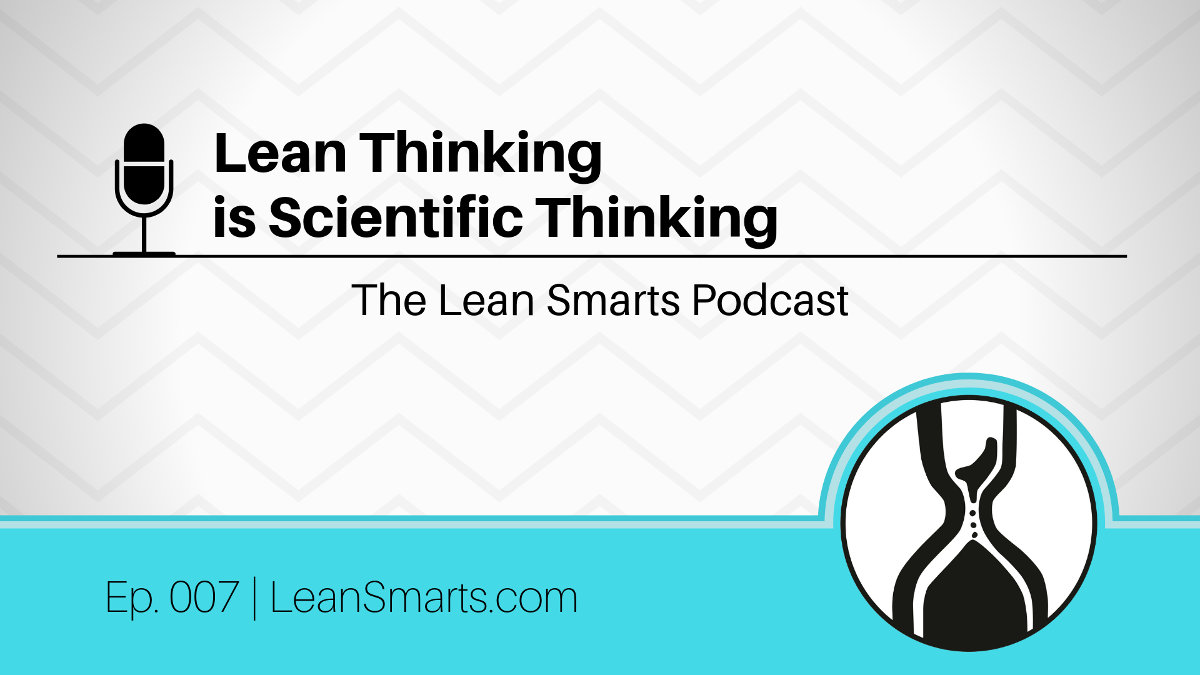 So far in this podcast series I’ve introduced essential lean concepts like the idea of value and the seven wastes of lean. I’ve also discussed the concept of flow and the evils of over production.

The thing is, though, that all of these ideas are the outcome of scientific thinking and how scientific thinking solves problems. Why is it that Toyota mastered one piece flow? It’s because it’s economy was devastated after World War II and it wasn’t possible to remain competitive when following the mass production model used by American car manufacturers. They had to get creative and learn how to quickly convert an order into cash. The answer was flow and just-in-time manufacturing.

When we talk about the concept of the seven wastes of lean, we are also talking in the context of solving problems. Each of the wastes is unproductive and problematic. They are wasteful uses of time and resource. When we eliminate waste, a lean practitioner will do so in a disciplined and scientific manner.

We haven’t yet talked about 5S or SMED on this show but even 5S and rapid changeovers were developed as Toyota continued to solve problems on the production floor. When you create a system of flow, you cannot function if everything isn’t straightened, sorted, shined, and standardized. Production comes to a screeching halt if someone loses a tool. Similarly, SMED (or rapid changeover) was developed because it was necessary to reduce changeover times in order to reduce batch sizes and improve flow.

You may have heard of the concept of kaizen, which means to make an incremental change for the better. Kaizen is a scientific process too of continuous improvement. Toyota doesn’t accidentally improve and get better. They are methodical and precise. Everything is planned and every plan is based on a hypothesis of expected results.

It’s important that we take time to appreciate this fact: that lean thinking is scientific thinking. As you progress on your lean journey, you have to recognize that the objective here isn’t to bolt on all these lean tools and concepts. You can’t just bolt on lean and copy and paste kanban, standard work, or 5S. I want to get your thinking past that in this episode and realize that what we’re advocating for here is scientific thought and disciplined problem-solving. The tools are useful for solving problems. But the characteristic of a lean thinker is not that he or she uses lots of tools, but that he approaches life and continuous improvement scientifically.

Where Do I Start With Lean?

There is a common question related to this idea that I want to address. The question is, “Where do I start with lean?” People want to know if they should start by learning value stream mapping, or 5S, or create a kanban system. A better question to ask is, “What problem do you need to solve?” Once you know what problem you need to solve, you can then select the best tools to solve it. This context of problem-solving is what created the Toyota Production System in the first place. The tools as we know them were invented to solve the various problems that the organization encountered.

For example, the application of flow and one-piece flow was born out of necessity. After World War II, Japan’s economy was decimated and Toyota had a problem: it wasn’t possible to compete with foreign mass production car makers and it was risky to invest the capital required for mass production techniques. So instead, the company invented the method of Just In Time (JIT) manufacturing to produce cars one at a time even with changing customer demand and product mix. The consequence was a one-of-a-kind production system that was highly efficient. All along the way and for many decades, Toyota was a problem-solving organization utilizing the scientific method to achieve kaizen.

So your goal should never be to go out and naively copy a lean tool or artifact you see at another organization. You need to start defining your problems and solving them scientifically.

Why Lean Education Is Still Necessary

At the same time, it’s still worthwhile that you go out and expose yourself to lean practices. Indeed, how can you recognize waste as a problem unless you first learn what waste is and appreciate the fact that waste is bad? How can you know that your organization is suffering from large batch sizes and limited flow unless you study and understand Just In Time manufacturing? And how can you detect variation within your processes until you become educated in the 4M’s of man, machine, material, and method and learn to appreciate the importance of stability and standardization?

Theoretically, you could just go it alone and reinvent the wheel–so to speak. But why would you? You’d be much wiser to humbly seek out what you don’t know and become educated in lean manufacturing and classic industrial engineering concepts. Everyone needs their own Damascus Road conversion–you know, that moment when the scales fall off your eyes and you can see waste for the first time. And then again, and again, and again. Because we can all learn to see more deeply and more sharply.

And so while I don’t recommend that you aimlessly start copying every lean method you hear about, I do recommend that you become educated in the tools of the trade. That way you can be more effective as a lean thinker and scientist.

PDCA and the Power of Iterations

Lastly, I want to introduce you to the Plan-Do-Check-Act cycle, which is also called PDCA. Truth be told, it goes by lots of names including: PDSA (for Plan-Do-Study-Act), the Deming cycle, and the Shewhart cycle. But I usually call it PDCA. PDCA is based on the scientific method and was made popular by William Edwards Deming, although he often gave credit to Walter Shewhart for the cycle. It is embedded deeply in the lean psyche and it was taught by Deming to Toyota and other Japanese industry leaders after the war.

As I said, it is based on the scientific method. P stands for “plan,” which basically means to form a hypothesis about what you are going to do. Maybe you have a process with 10 steps in it and you want to conduct a mini experiment to do it in eight. That’s your plan and hypothesis.

Then you go out and do your plan, which is the “D” in PDCA. (I should mention that most people don’t follow the PDCA cycle; they just follow the D cycle: do-do-do-do-do!)

After completing your test, you check the results, which is the “C.” Some people prefer to say “study” the results and call the cycle PDSA because they believe that “study” is a better word for analysis and that “check” suggests merely inspection–and it’s more than just inspection. At this point you look at your 8-step experiment and consider, “Did I achieve what I expected? Are the results better or worse than what I predicted?” You’re basically taking a moment to confirm your learning by asking the question, “Did I obtain my hypothesis? Why or why not?”

After checking and studying your results, it’s then time to act on them. That is the “A” in “PDCA”: to Act. At this point you may apply your learnings permanently in updated standardized work and training, or you may conceive of a new experiment and restart the PDCA cycle all over again.

The amazing power of the PDCA cycle is when you learn to run mini-experiments very rapidly. When you do this you tap into the power of iterations. The faster you iterate and spin the PDCA cycle the faster you learn and the more you accomplish. Also, when you have an entire organization of people spinning these mini PDCA cycles it creates massive momentum for continuous improvement, kaizen, and problem-solving.

Everything You Do Should Be A Learning Experience

The scientific method and PDCA cycle is all about learning. In application, you need to realize that everything you do is a learning experience.

Toyota has been learning for over half a century, and the Toyota Production System is a continuously evolving entity. But lean and TPS are both based on a scientific approach. And it is the approach that is evolving the system, not the ad-hoc bolting on of ideas and lean tools.

Therefore, you should never assume what tool you need. The tool you use should always be based on the problem you’re trying to solve.

As you continue your lean journey I highly recommend that you keep coming back to this idea of scientific thinking. It’s important to not get lost in the many lean tools and the marketing messages that come alongside them.

You should also return to this idea, because it’s easy to intellectually understand it, but what we’re going for is to live and breathe it. You need to learn to live and breathe PDCA so it becomes a way of life. Becoming a disciplined scientific thinker and doer is challenging. As I said, most people and many organizations simply follow the D-cycle of “do-do-do-do-do.” Ingraining the habits of PDCA takes a lot of effort and many months and years to become proficient.

So, maybe it’d work best to end this episode with a challenge to you to consider whatever project you are working on right now at work or in life. What’s the problem you’re trying to solve? What’s your plan? What small-scale experiment can you run to learn something as fast as possible? Then check your results and continuing adjusting as needed.

I hope you’ve enjoyed this episode today. It’s been a fun one for me. Now off you go!