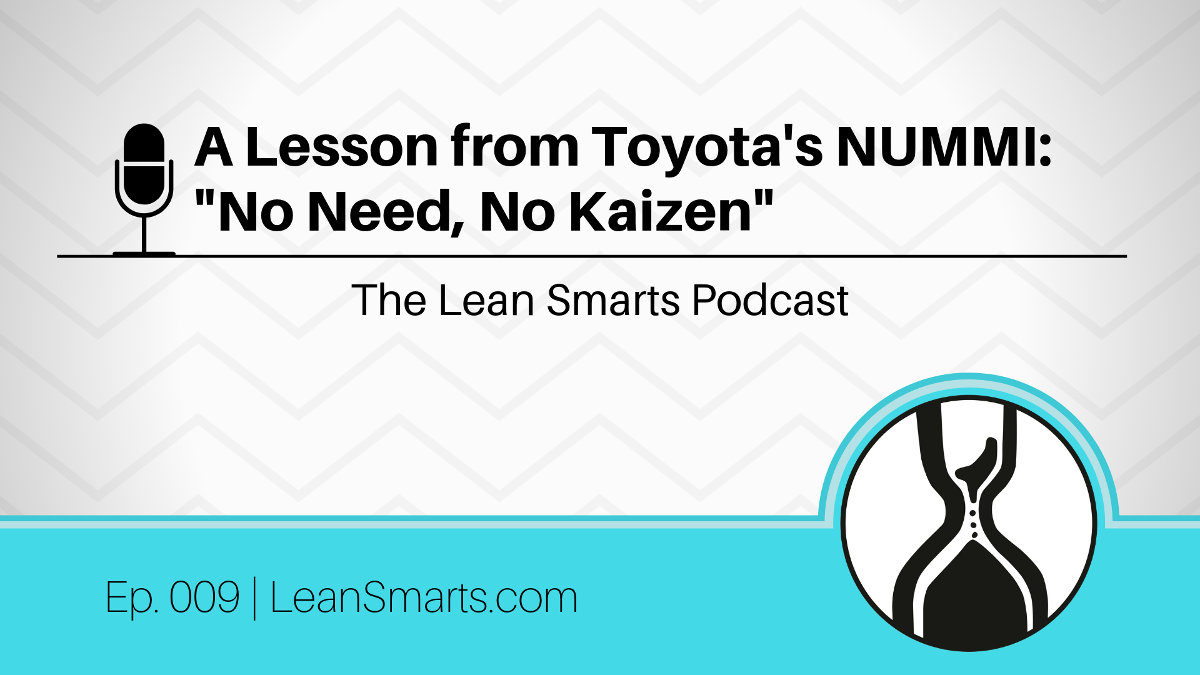 What I have to share with you today is not a lean tool but a profound truth. I learned it from a friend and mentor of mine who spent some time working at the historic NUMMI plant with Toyota in California. Sometimes he listens to this show, so let me tell you—if you are listening—that you know I’ve said I’m a bad storyteller. But regardless I’m going to do my best!

“No Need, No Kaizen” – A Story from Toyota’s NUMMI Plant

So this friend of mine worked at Toyota’s NUMMI plant and had a Japanese sensei, as is common when Toyota has started up new manufacturing plants. One day my friend was with other team members and this sensei asked, “which of you know what the seven wastes are?” My friend quickly and proudly jumped in and rattled down the list of wastes. If the wastes of lean are new to you, check out episode 002 of this show. Anyway, the sensei looked unimpressed and said, “you don’t know waste!” Now, my friend is an American, and the sensei then turned to another team member who is Chinese and said, “and you might know waste!” Then that day ended.

The next day the sensei took the group out to lunch to a Chinese buffet. Everyone was hungry and went about serving their own plate and sat down to eat. And it was a buffet! So people did what people do at buffets and piled their plates high with food. Everyone was eating and having a good time. But the sensei did something different. When he served himself food he would walk up to the buffet line, grab a small portion of what he wanted, and then return to the table. He ate his food, and then returned back to the buffet line to get some more. He did this until he was finished.

When the meal was over, the sensei got everyone’s attention. His plate was clean and bare. Then he pointed at everyone else’s plate, which was full of leftover scraps and food. And he said, “this is waste! We are finished for today.”

Everyone was in shock. The next day they were together again with the sensei. He taught them a phrase he told them to never forget: “NO NEED, NO KAIZEN.” He made them say it and repeat it over and over. “No need, no kaizen. No need, no kaizen.”

My friend, the American, didn’t know waste according to the sensei because he’s from America—the land of plenty. When there is abundance and little need, people are not forced to improve. And this was obvious at the Chinese buffet. When there is all-you-can-eat buffet on a table, people tend to indulge themselves. And many don’t even realize they are doing it. But in Japan, Toyota had to survive after the devastating world war, in a small economy, with threatening competitors. The need was extreme. There was no abundance. And in that environment of challenge and suffering, Toyota got continuously better and better and better. The sensei joked about the Chinese team member maybe knowing waste because according to him, China fell somewhere in between the United States and Japan in terms of its abundance or scarcity.

But this was his point while teaching at the NUMMI plant: Most people don’t change unless they have to—unless they recognize the need to.

This point is very true. Many companies learn about lean and play with some lean tools. They even complete some lean projects. But they only transform to the level that they recognize their need. When there is no need— people don’t do standard work! They don’t reduce inventories and expose problems. They don’t demand world class efficiency and effectiveness. When the going is good, they say, “enjoy it! Take it easy!” There’s no need to do anything dramatic. No amount of change is truly needed! When the going is good, just keep going!

Is it any surprise then that as many people grow old they don’t change apart from some kind of crisis in their life? It’s not the only way to change, but without extreme need, some people never take the plunge. They stay the same until the day they die. Many organizations are the same way. Until they are faced with an undeniable crisis, they just don’t change.

Applying The Truth of “No Need, No Kaizen”

So what does this mean for you? It’s true that some of the better lean turnarounds in history were accomplished when a company faced a crisis. That’s because a crisis has a way of forcing humility and hunger for change, as I’ve already shared.

But if you’re not facing a crisis, what do you do? I think what you do is change your way of thinking and intentionally place yourself in challenging situations.

Consider this quote from Taiichi Ohno himself from the book The Birth of Lean. He says:

He says, “you’ve got to assume things are a mess.” When you walk through your organization, is that how you think? Do you assume things are a mess or do you say, “I think things are pretty good?” You will never improve if you don’t see a need to change. This is true everywhere, by the way—not just at work but also at home, in relationships, in marriages, as parents, everywhere. Unless you can see what’s wrong, you’ll never fix it.

Now does this mean you need to be a negative, pessimistic person? Absolutely not! But if you believe something is always wrong and can always be improved, you’re more likely to see the problems that are already there and previously invisible to your eyes. You can still take pride in your work. Be proud! But be even more proud in your humility to continuously change—if that is even possible!

If you’re convinced you’re doing things the right way, your lean initiative is doomed to fail before it even gets started.

So the two things to do to get in touch with your need for change are to:

It’s also useful to visit excellence in other places. Sometimes, seeing someone else doing something world-class brings conviction—at least it does for the humble. The scales fall off your eyes and you can immediately see something you couldn’t see before. You see your own need, and a solution. That brings change.

So perhaps the third thing I can recommend is this:

So, get training. Read books. Visit other companies. Hire a consultant. Find a sensei of your own. There are all kinds of things you can do to expose yourself to lean and make the scales fall off. And one time isn’t enough, because peeling off the scales is like peeling an onion. There are many layers to ego, pride, and the blindness they create. You can never stop growing, because kaizen actually starts with you.

Okay, well that covers it for today’s episode on “No Need, No Kaizen” from my friends first-hand experience working at Toyota’s NUMMI plant. I hope you’ve enjoyed this episode and that these words stick with you for the rest of your life: “no need, no kaizen.” It’s a profound truth.

Kaizen is actually one of the lessons contained in the Fundamentals of Lean course. You can learn more about it there and even start a free trial today. Just go to leansmarts.com/fundamentals.