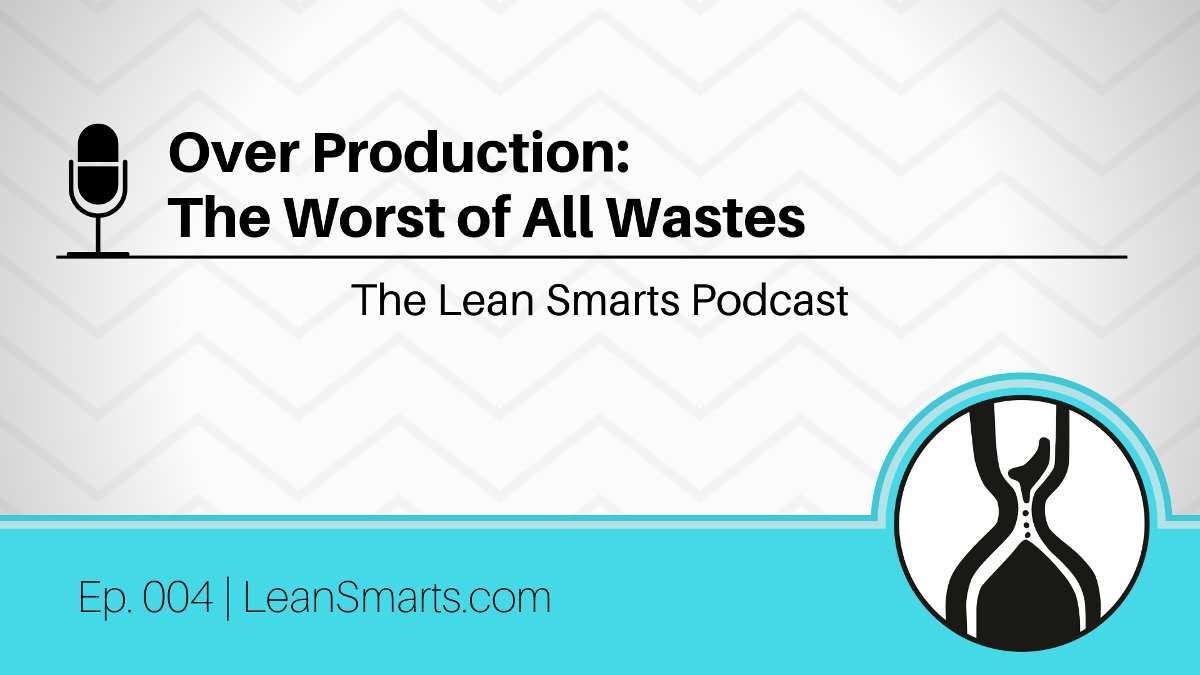 Thank you again for joining me once more for the Lean Smarts Podcast. I’m you’re host, Daniel Crawford, and this is the show where I talk about lean in simple terms and try to keep it fun. In the past few episodes I have given an overview on each of the seven wastes of lean. But there’s one that is worse than all of them: over production. In this episode I’m going to explain what over production is and why it’s the worst of all wastes.

So what is over production?

We’ve talked about over production briefly in episode 2, but I’ll take some time here to define it again before diving deeper into it.

Over production is when you create more of something than is needed or sooner than it is needed.

Delivering More Than Is Needed

So let’s take the first part of that definition and give more clarity to it. The first part of over production is this: when you create more of something than is needed.

Here’s some examples. Let’s say your busy season is coming up and you’re forecasting how much product you need to make. Just like weather forecasts, they are almost always wrong. It’s actually not possible to accurately predict future demand. But taking the example further, if you project that you need to make 1000 widgets and then you only sell 900, that means you’ve over produced 100 widgets. Those items have to then be sold at discount, scrapped, or recycled if possible. It’s extremely wasteful. Just think of all the labor hours, motion, inventory management, storage space, overhead, and everything else that went into making and storing those 100 extra widgets.

This is an example of over producing more than what is needed on a macro scale. But it can also apply on the micro scale as well. Think about one operator or one admin person. Let’s say instructions are given to gather and analyze data from all of last month. Someone looks through all the data, whether on paper or in digital files (which is the waste of motion by the way). But then in the end management decides that the project is no longer relevant. That means all of that work was over production and wasteful. In the case of an operator, if he or she is working at a machine and cranks out more items than needed due to scrap projections or pressure to increase machine output, at the end of the day that WIP (or work in process) is waste. And lots of effort went into making it!

These are all examples of creating more than what is actually needed, the first part of our definition of over production.

Delivering Sooner Than Is Needed

Let’s go back to the macro level. You make 1000 widgets and put them on the shelf and they hang out there as inventory for a while. We’re assuming that all 1000 are going to be eventually sold. But they are delivered to finished goods inventory weeks or months earlier than needed. The first thing I might observe is that this requires a warehouse that is large enough to house all 1000 widgets. That increases overhead, and it also stretches out the physical work environment for workers. That means more motion of walking. Maybe you even need forklifts to move stuff around because you’ve got so much. It’s also true that the inventory requires lots of managing. Someone has to keep count of what’s on the shelf. Someone has to perform the impossible task of forecasting customer demand and availability of product, which is very time consuming and hard to do. I’ll also be honest and say it’s common for there to be traffic jams on the shelf or on the floor, because there are so many large batches of product being managed at any one time. It’s hard to coordinate all that inventory management. Lastly, when you finally sell the 1000th widget it’s not uncommon for there to be a scheduling crisis due to the long lead time of producing every other product in large quantities as well. Big batches tend to have long lead times, and this can cause terrible delays.

(Just so we’re clear, the answer is NOT to purchase an MRP software system. Unfortunately the physical world–the world that we live in–doesn’t match or respect the digital world of software systems. They are always inaccurate to one degree or another. Plus, that’s again just more managing and overhead to try to keep the software up to date with accurate information.)

So on the macro level, there are many indirect consequences to having something before it’s needed. It’s got to go somewhere, and it’s got to be maintained, and it’s a huge headache to manage it. Just imagine the firefighting that happens when a defect is discovered in the batch. Do you 100% inspect all remaining 1000 items on the shelf? Do you throw them away? Do you know if other defects escaped and were already sold to your customer? The delayed feedback of large-batch systems is plagued with lots of problems.

On the micro level, let’s say that an operator or department completes step A is in advance of step B with hours, days, or weeks of time in between finishing step A and starting step B. The consequences are similar to the macro example. The WIP has to be handled and moved somewhere, it has to be kept organized (or left disorganized), it has to be found, it can’t become contaminated, damaged, or otherwise degraded in quality. And it also needs to be completed fast enough before discovering too much was forecasted, or the design or specification is changed. Of course if it takes a long time to complete a product you increase the risk of the product design or specification being updated. Then everything might need to be reworked.

So these are all examples of the wastes involved when making something sooner than it is needed. It multiplies the other wastes. That’s why over production is so bad!

One of the primary problems with batch or over production is delayed feedback. If you make 1000 things before moving all 1000 to step B or to final QC inspection, you delay the feedback of quality problems. If something was wrong on the first widget, you won’t discover it until the 1000th widget when all 1000 items are passed onto the next person. If you were manufacturing in smaller batches or in one-piece flow, you’d discover the problem much faster and even immediately.

The Antidote to Over Production: Flow

Instead of over production, which multiplies all kinds of waste, the better approach is to learn how to make products “just in time.” Just in time, or JIT for short, is a pillar of lean manufacturing and the original Toyota Production System. It’s the antidote to all these problems I’ve identified with over production. It’s somewhat synonymous with the word “flow,” which is the ideal state of lean and our ultimate goal. Perfect flow isn’t attainable, because we’ll never fully eliminate all waste. But as we reduce the seven wastes in the process the flow is improved and product, material, or information is delivered perfectly and immediately when it is needed.

The primary indicator and symptom of over production is inventory. If you look around and find inventory waiting to be processed or sold, you know that the flow of work has been stopped. The inventory is being supplied sooner than it is demanded. It’s over production, and it bogs down the organization and dramatically increases costs.

So over production is bad. In fact, it is really bad. And that’s the idea I’m trying to communicate in this episode: That over production is the worst of all wastes. Now, doing things just in time or one piece flow creates other challenges and I’m not addressing them in this episode—things like equipment utilization and long changeovers, running out of inventory, and the like. There’s solutions to those problems, and we’ll look at them another time. Right now I just want you to know that over production is wasteful and we’ve got to eliminate it!