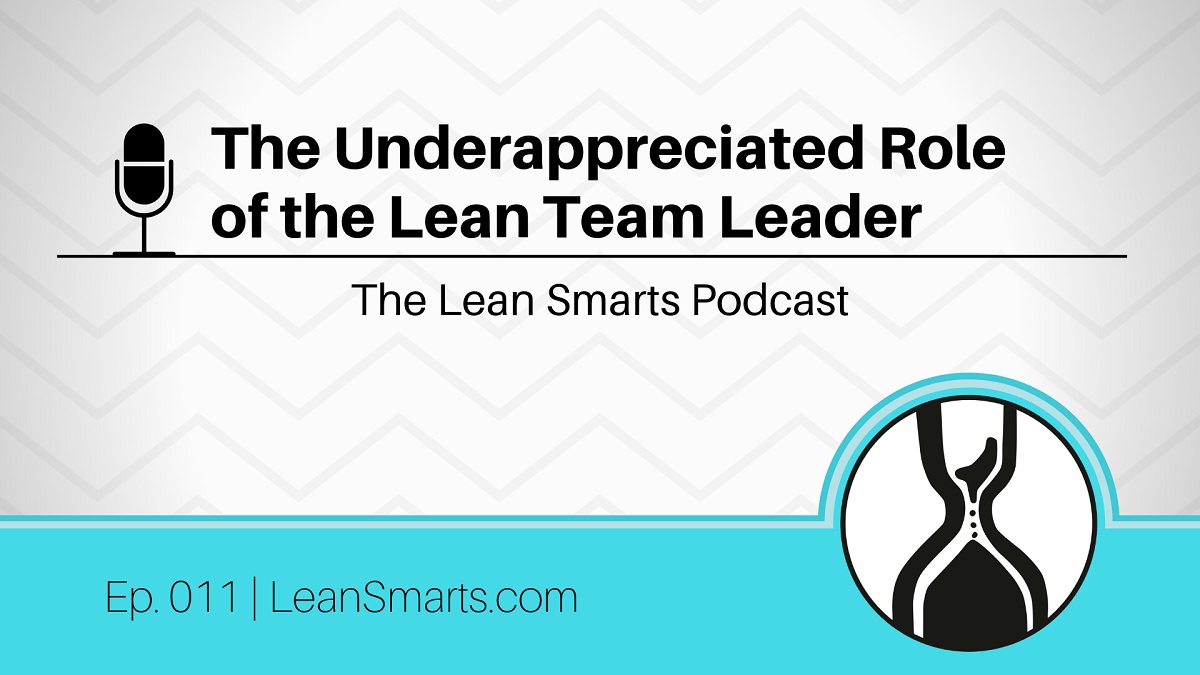 Today I want to talk about a neglected and underappreciated individual in organizations today, and that is the team leader. But the first challenge we have when discussing this topic is confusion over what a team leader is. You see, you probably have something at your organization you think is a team leader. You might call it a team leader, or maybe you call it a lead. But it’s someone in some role of responsibility or supervision that is above that of a team member but below that of a supervisor. But let me be very clear: a lean team leader and a traditional team leader are absolutely different. They are not the same!

So if you’re going to gain any insight from this episode, you have to trust me that the concept of a lean team leader is radically different than what you’ve seen in traditional organizations. They may have the same title, but they have very different function, and function matters more than just title.

It’s very true that lots about lean is confusing, especially when you’re new to it! There’s lots of misinformation online, among people, and even among experts. That’s why Lean Smarts exists: to make lean simple and fun for everyone. It’s also why I created my Fundamentals of Lean course, which goes into detail about lean management. If you or your organization is ready to learn more, head on over to leansmarts.com/fundamentals and start your 15 day free trial of the program. It’ll teach you all the fundamental concepts of lean and make navigating your lean journey much easier!

Now before talking about the function of a lean team leader, I’m going to give some definition to a traditional team leader. To access the show notes and transcript of this episode just go to leansmarts.com/011.

Some traditional organizations don’t have team leaders at all, or very few. This is not surprising, because traditional organizations often don’t like team leaders. They are viewed as an added waste that are costly to employ when you could have more team members instead. When this is the belief system of an organization, it’s commonplace for a single supervisor to be responsible for a large group of team members and no team leaders in between. This diminishes the amount of support that can be offered to the people doing the work.

A lean team leader has much higher expectations. They spend roughly half of their time working or assisting on the line and half of their time off the line. When on the line, they are training new operators following the disciplined TWI Job Instruction process. (If you’ve not heard of TWI Job Instruction it’s an extremely disciplined and effective approach to training and deserves an episode by itself.) They also cover absenteeism, perform process start ups, verify equipment, perform changeovers, do quality checks, and many of the activities you might expect a traditional team leader to perform. This is not very new.

But what a team leader does off the line is distinctively different. The leader is responsible for the daily production results. He or she monitors hour-over-hour boards and other production visual controls and regularly measures the gap between expected and actual results. His responsibility is to preserve output. Don’t forget that–that’s huge. Preserve the output. A gap in performance is a trigger for action because a team leader works scientifically. Problems aren’t neglected or passed onto a supervisor. The team leader drives continuous improvement and problem solving within her production team. She is the gatekeeper of continuous improvement and kaizen ideas and efforts. So the team leader leads the way in solving problems and improving processes scientifically.

Since a primary responsibility of the lean team leader is to preserve output, the team leader is also the planned resource for abnormality control. You see, problem-solving is extremely important in lean organizations. It’s so important, that lean organizations budget a team leader’s time to be available for dedicated problem solving. When an abnormality occurs, a team member flags the team leader or triggers an andon light (which is typically a red light that stops the line and indicates a problem). The team leader rushes in to resolve the abnormality and solve the problem to root cause. They can do this because they are extra. Production output doesn’t depend on them working on the line. The output actually depends on them working off the line–do you understand? Output cannot be preserved unless problems can be fixed. And problems cannot be fixed unless team leaders have availability to fix them!

So the activities of a lean team leader may look like fluff and waste to a traditional organization. Rather than producing output like other team members, the team leader is dedicated to preserving the output. And you preserve the output by dedicating human resources to constantly monitor, measure, and improve the production process and team members themselves.

So the expectations placed upon the lean team leader are very high. They are critical to the production process and engaging everyone in continuous improvement every day.

Other functions of a lean team leader that have not already been shared include:

The importance of the lean team leader cannot be overstated. In fact, world-class lean organizations often have team leaders in the ratio of 1-to-5 team leaders to team members. This small ratio means every group of 5 team members get substantial dedicated support–far more support than their counterparts at a traditional organization.

Now, not everyone is a good pick for becoming a team leader. Some people wouldn’t want to do it, or simply wired to do it. And that’s okay! But by elevating the role of the front-line team leader and giving them more responsibility, lean organizations elevate the performance and robustness of the entire organization. It become strong and unstoppable.

How to Create a Team Leader

A common question that people ask at this point is, “how do I create a team leader in my organization?” What they are really asking is how to get buy-in for the team leader concept when the organization doesn’t want to add additional headcount and labor expense.

Usually, the answer is quite simple. 90% of everything we do is waste, and if you’re asking from a traditional organization, you’ve also got a ton of low hanging fruit. Don’t just hire more people to create your team leaders. Go to the gemba, look at your processes, learn to see waste and eliminate it, and thereby free up someone to become a team leader. If you can eliminate the need for one person in a process, then you’ve liberated one person to become a team leader.

Very often we fall into the limiting belief that, “I don’t have ‘fill in the blank’ to do that!” …whether that is money, space, equipment, people, or something else. But you do. You’ve just got to see the waste first. When you see your own waste, you’ll discover your opportunity.

Well, that covers it for this overview of the lean team leader. In so many ways, team leaders are the manpower of the lean management system. And if you’re serious about growing people, you’ll start developing team leaders.